The latest version of the Mustang platform does a fine job of putting power to pavement. My Magnetic Grey example shown here is a 2015 GT Premium Coupe with six-speed manual transmission and performance package. Factory-equipped with Pirelli P-Zero rubber, Brembo brakes, line-lock and independent rear suspension. The 435 HP 5.0 Coyote V-8 has less torque for hard-pulling at higher speeds compared to the built 428 CJ in my Ford (Torino) Cobra, but it winds up fast and makes the Mustang a very fast car too! When it comes to handling, though, the GT is “lightyears” ahead of the Cobra. The Cobra might win a 100-130 mph race, but the Mustang RPMs build quickly for faster 0-60 and 1/4 mile results, besides having the ability to turn corners at speed!

First production bike with 100 horsepower–now there are lots with more!

Ford’s version of bare-bones muscle is exemplified by this Fairlane Cobra Fastback, equipped with a 428 CJ motor and a close-ratio 31-spline top-loader 4-speed. This rare Q-code model is an original 90,000 mile survivor with new paint, rebuilt mechanical, and some NOS parts. Disassembled at 88,000 miles, minimal bodywork with no bondo, lacquer repaint in original color, engine rebuilt and balanced, NOS parts added. Original interior and trim. NOS parts include Cobra snakes, door handles, hood pins/cables, and exhaust tips. Original snake emblems and hood pin assemblies saved in a box. Original type Goodyear Polyglas tires. 3.5:1 rear ratio. Rechromed rear bumper, and front bumper has original chrome! Fresh suspension, clutch, brakes, bearings, U-joints. Very strong runner! These models are often called “Torino Cobras,” which is not really correct. For 1969, Torino and Torino G.T. were upscale versions of the base Fairlane. You could order a 428CJ in a Torino G.T., but that was not a Cobra. I call them Fairlane Cobras, because that implies the base model from which the Cobra was built, but that is not quite correct either. The 1969 product brochure labels Torino, Fairlane, and Cobra seperately–so just plain Ford Cobra is correct, but that confuses it with the Shelby A/C Cobra, which sometimes is confused with the Shelbly Cobra Mustang (the 500 model had the 428 CJ as well). Confusing model names, but whatever you call it, this fastback is rare, practically original, and stunning! Original Northern Idaho car, now in Eastern Washington. Have original build sheet intact. All original equipment matches data plate.

Schwinn’s top-of-the-line middleweight model. Typical of “equipped” bicycles of the era, it is loaded with accessories–accounting for the $87.95 price tag as compared to the $52.95 price of of the basic Typhoon version of the otherwise-similar 26-inch boy’s-frame middleweight bicycle.

While this Jag has a 3-speed hub, even the deluxe Schwinns of this era could be purchased with a single-speed coaster brake hub or a 2-speed Bendix Automatic “kick-back” hub. The earlier triple-red-band Bendix hub used metal discs for its braking mechanism, whereas their later triple-yellow-band hubs used a more efficient and serviceable expandable drum design.

Restored-to-factory-stock Ford Cobra fastback with precision balanced and built 428 Cobra Jet FE V-8, close-ratio (very high first gear making the other 3 fairly bunched up) 4-speed and 3.5 rear gear ratio. That combination made for 60 mph+ speed at 6500 rpms in first gear–then there were still three gears left! Also, it was fun to “lug” it by flooring the gas pedal at 60 mph in fourth gear to see how fast the speedo would rise past 100–then when you back off the nose dives because it was pulling so hard from the tons of torque.

I think I paid 400 bucks each for those FoMoCo exhaust tips–hard to find!

Needs work, but appears complete–a few things might be hard to find.

The tach I replaced the factory clock with long ago was still mounted.

I knew all about it then, and see recent pictures of it now, but I know nothing of what occurred during the 50 years in between.

My first car, a 1960 Buick Invicta Custom Convertible, passed quickly through my grip in 1967. At age 16, I wanted something more modern with full factory rear wheel openings, so later in 1967 I bought a 1963 1/2 Falcon Sprint (which was lots of fun with its lightweight unibody, 4-speed and 260 V-8, but still had angled rear wheel wells causing my wider tires’ sidewalls to rub on the lip) and traded up to a 1966 Mustang GT Convertible by 1968.

I lost track of the Buick quickly after selling it in late ’67, but it left an ever-lasting impression. In particular, the now famed and valued metal-backed factory leather seats and padded center console had a feel and aroma I can still “smell.” Classic then, classic now. The “speed minder” that set off a buzzer made an impression–115 was the highest setting, which set up a challenge to make it buzz when set there. The Dynaflow was weird, but a jack-rabbit takeoff could be achieved in “L.” The foot-operated radio wonder bar was a fave too, not to mention the accelerator-pedal-start feature.

But lately, my friend tracked down an abandoned B60 ICC (1960 Buick Invicta Custom Convertible) that circuitously made it from western Washington, through the northern Idaho junkyard in the shown here, to where it now sits unrestored in Canada. That latter fact has not been verified for awhile, so its current situation is only supposed–maybe it’s fixed up by now. I was initially skeptical that it could possibly be “the one” but was later assured–I even talked with the Canadian owner.

The clincher for verification was the sighting of the AHC 571 license plate on the front of the car in both the 1967 and 2000s photo. I’d also told my friend that I had replaced the factory clock with an aftermarket tachometer while he was researching the car’s whereabouts and darned if the junkyard shots didn’t show that it was still in place too!

My two books, How to Restore Your Collector Bicycle & Classic Schwinn Bicycles, are available at amazon.com, thecabe.com & other booksellers. They both contain photos and text with tips for identifying, classifying, evaluating, maintaining & collecting the old two-wheeled relics.  Antiques, heavyweights (balloon tire), middleweights & lightweights are covered in both books. The How To book adds practical, step-by-step mechanical & cosmetic renovation procedures used by collectors & restorers, while the Schwinn book chronicles the history of Schwinn and its various models.

thecabe.com (classic & antique bicycle exchange), is an excellent old bicycle resource, with a Website offering forums, data archives and merchandise for bicycle enthusiasts of all descriptions.

Speaking of Websites, the ultimate antique and collectible bicycle database for all brands of bicycles is available at nostalgic.net. Lots of photos, articles, vintage advertising scans, et cetera.

Still gathering photos & data for a photo gallery of middleweight & lightweight Schwinns to appear in this space.

Muscle cars & other interesting vintage vehicles, of two & four wheel variety, will be featured also, along with topics of interest to all vehicle operators (drivers & riders). Stay tuned… 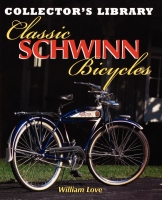